Update: Something Ave. was removed from the Apple and Google Play stores this year due to new requirements. I'm hosting it as a website for the time being until I have time to update the submissions. It's available at something.owen.cool

I've spent a lot of time over the past year working on this project, which I was calling "lostly" that originated in my last summer basically as a silly joke.  I began the project in earnest at the contemporary artists center in Troy, NY.  You can read about that experience here.

It took me a while to finally finish the app, the drawings were time consuming, and I rewrote the story a few times, and after I was finally ready to submit it at the end of September, I spent most of October and November trying to get Apple to accept it.

It was rejected originally for resembling an iPhone and having objectionable content, so I had to change the story from being about a "lost iphone" to a lost "cellular phone" and I had to get rid of a lot of the bad words (there are still some in there that Apple either didn't catch or doesn't care about, so see if you can find them).  I even had to cut the dumb joke that originated the project: 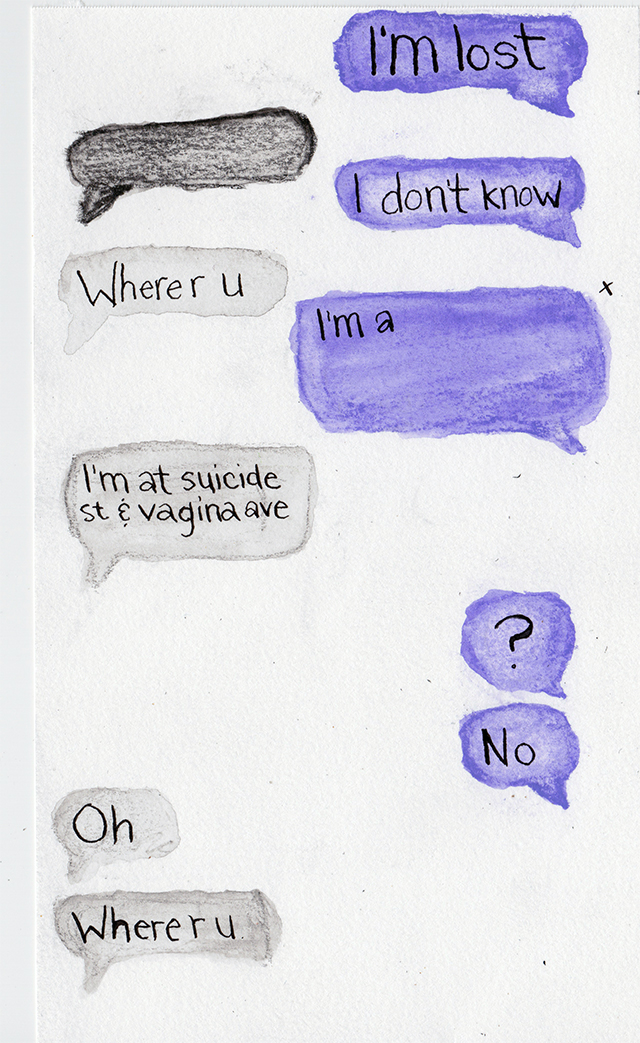 This is one of the first drawings I did for Something Ave. and some of those speech bubbles are in the final version.  Of course, I'm aware that beginning an entire interactive story with something that seems like a very coarse joke might not be the best approach, but as with much of my other work, it's what the dumb joke reveals about the character that makes it worth while.

Something Ave presents a subjective, metaphorical world mapped onto the interface of a smart phone.  It represents the way that a character's emotions can take over their life, how normal mundane events and actions are reframed or internalized differently than how they are represented in the shared world.  Last night my roommate made a joke about how awful it was being a teenager, and how teenagers must be thinking something like "I suck" over and over again.  It's this kind of psychological state that Something Ave. explores, or the way our emotions are mapped onto our experiences.  The story in the app is not linear or based in realism.

It's not really about the irony of feeling lost in the age of connectivity, though I'm aware that is something you could take away from it.  It's really just a story that I followed from one silly joke through a long process of drawing, writing and programming, to a complex world represented through this fake device.