Refresh removed from Apple store
Posted on May 10, 2017
in apps

Back in January I got an email from Apple about the first app I published, called Refresh by Owen Ribbit (I added "by Owen Ribbit" because Refresh was taken), was going to be removed because it hadn't been updated since it was first published in early 2014. I would have 30 days to upload a new build. 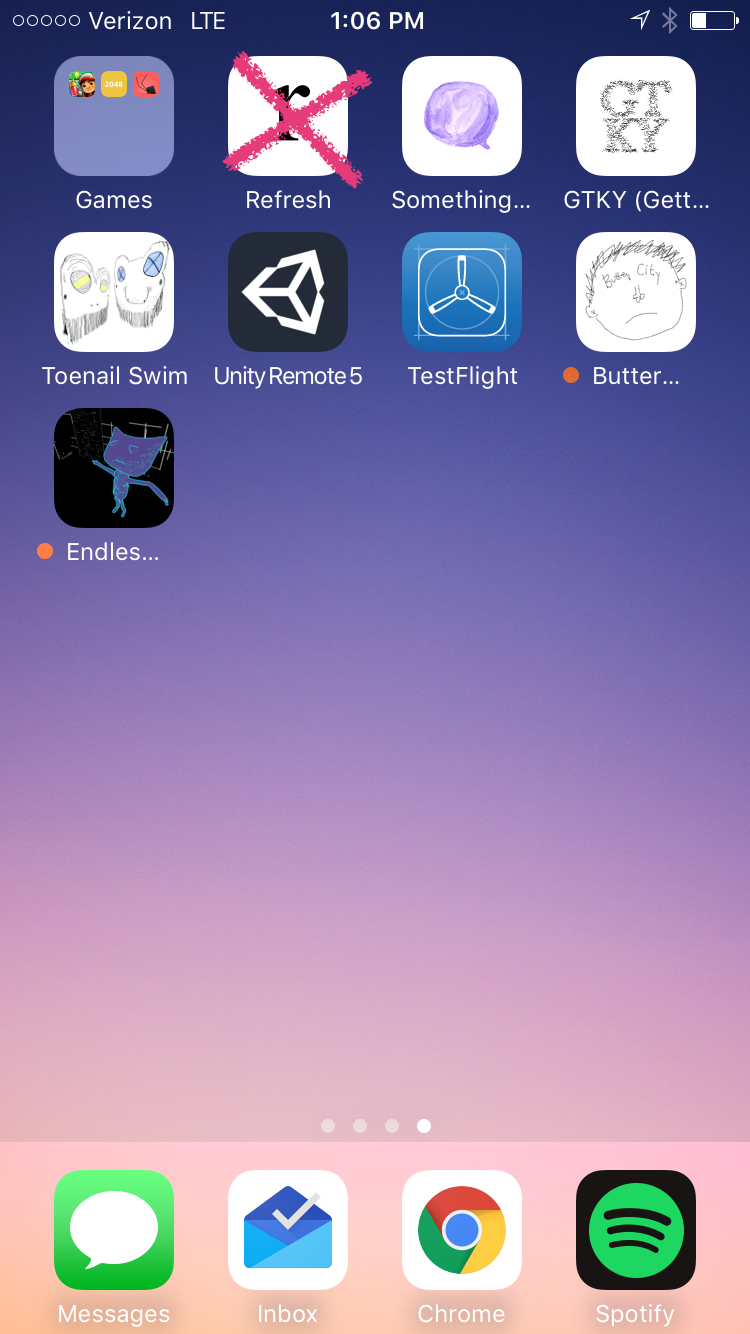 I was working on Butter City and Endlessness at the time and I didn't want to get sidetracked for two or three days making a new build of an app I hadn't looked at since 2014 so I let the date pass and Refresh was removed from the app store. During spring break a few weeks ago I finally had time to spend a day looking at Refresh. I wasn't sure why the app was no longer compliant, but I had written in using PhoneGap and I thought maybe that was the issue, so, as I documented here, I wrote an iOS native version of the app using Swift and the UIWebview.

It turned out that this was not the issue. The app, which had been in the app store for 3 years, was apparently no longer "useful". I kind of get that. Apple probably isn't interested in publishing experimental fiction. Refresh definitely doesn't have a "use" like Uber or Tinder or other apps like that. I appealed the rejection of Refresh 2.0 but got basically the same response. For now, while I decide whether to do it in a way that seems more useful, I'm just going to put it on my website for free.

I don't think that Apple is like bad or anything, but I do wish they would leave my app in the app store. I think apps are an important platform for artists to be able to use for new work, but Apple has no real reason to think that, or even if they did think that, they might not think that my work is necessarily worth that. But I was kind of annoyed at the suggestions they offered to "improve" the app: "you may consider implementing features that allow users inputting their own stories, display different interactive elements, and share stories with friends."

The "display different interactive elements" is pretty ambiguous, and if I do redo the app, this is the route I will take, but "inputting their own stories" and "share stories with friends" both annoy me because it kind of assumes that random people's stories have more value than the actual story I'm trying to tell. The app is just a story. It's not supposed to absorb other people's ideas, or create a social experience. The implication is sort of that authorship is pointless in the mobile media world. Which, maybe it is. But that isn't very fun for an artist. But I still have a few apps in there and hopefully will have a couple of new ones by the end of the summer.

Anyway, until I redo it and get it back in the store or figure out another way to distribute it, here's Refresh, online. I recommend viewing on your phone. The advantage of this version is that it's uncensored.